The Xiqu Centre is one of 17 cultural and art facilities of the West Kowloon Cultural District, a cultural project given high priority by Hong Kong. 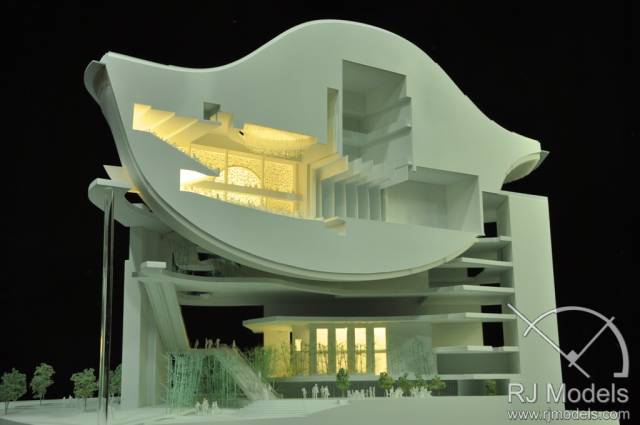 A 10-month design competition was held in the West Kowloon cultural district in March 2012 for finding the best conceptual and design team of the Xiqu Centre. 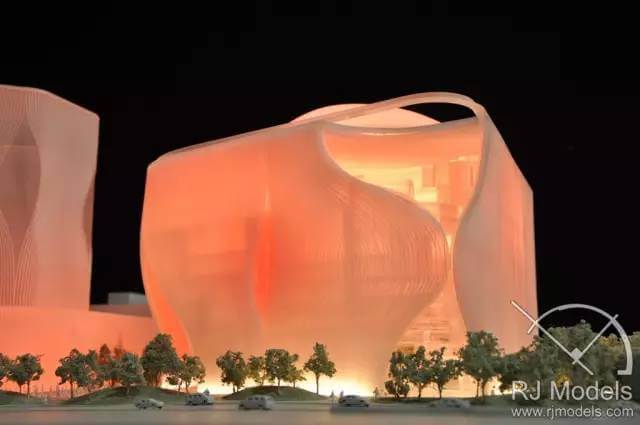 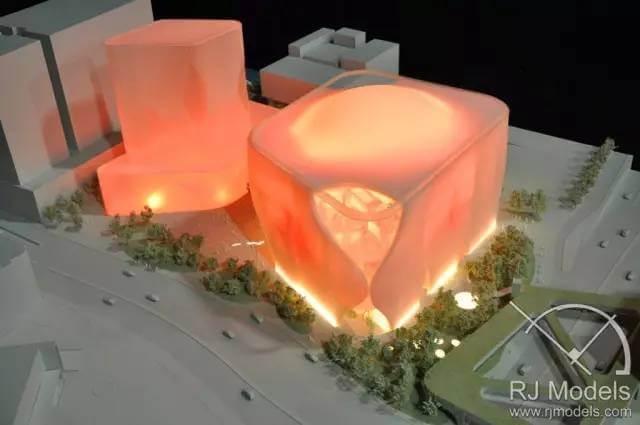 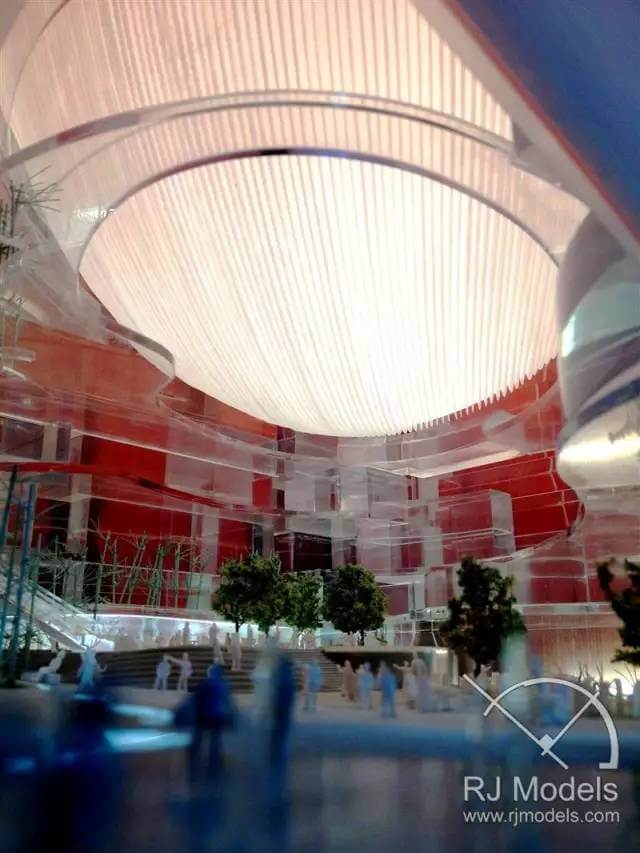 More than 50 architectural model making teams around the world were interested in the project.

Two top architectural design companies, Bing Thom Architects from Canada teamed up with Ronald Lu and Partners from Hong Kong and appointed RJ Models to make a museum model for the world-class cultural project, and they finally won the competition.

RJ Models got involved in the entire process from early stage design to construction.

In addition to showing the appearance and function of the Center, the architectural model draws more attention to the Intangible Cultural Heritage of Humanity of opera. 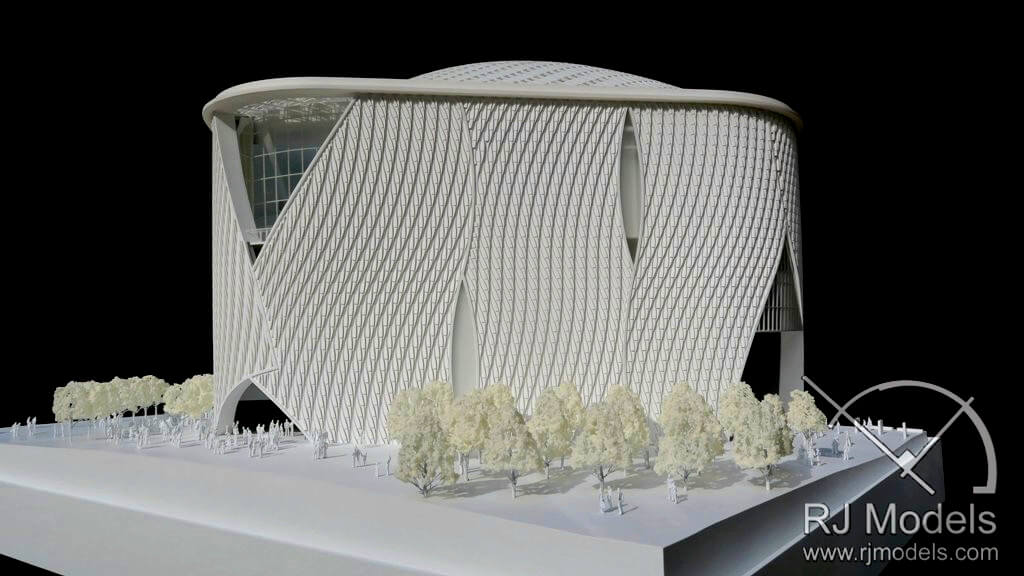 With a unique facade combining traditional and contemporary elements, the streamlined model resembles a stage curtain and looks full of vigor and vitality. 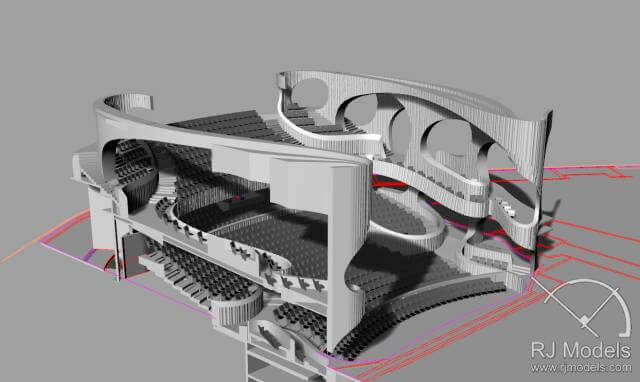 Expressing the concept of “qi” or flow through its curvilinear paths and elements.

The Xiqu Centre inevitable requires a complex structure because of its function. 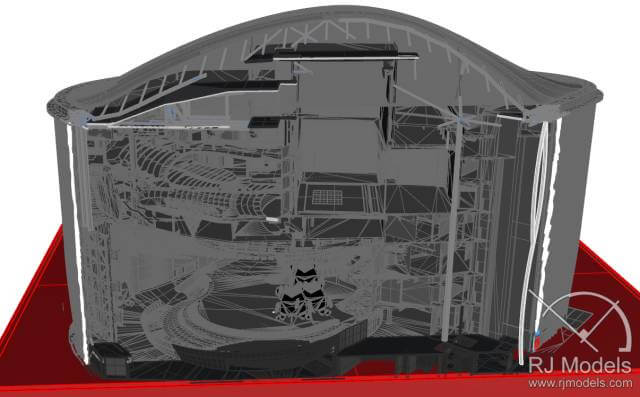 3D section of the Xiqu Centre drafted prior to making the conceptual model.

It’s a very complicated process to make its model on a scale of 1 to 100 and a 3D drawing was drafted prior to fabrication for representing its design and material. 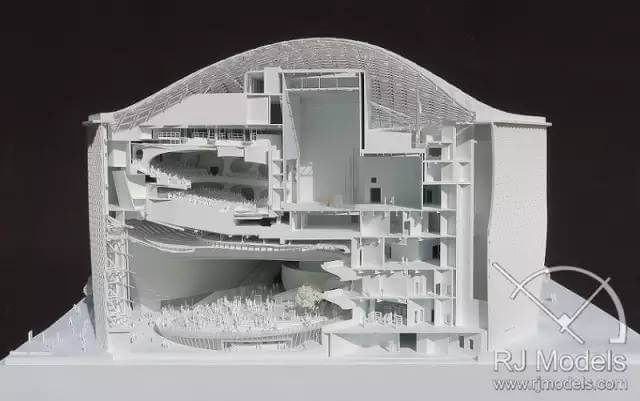 Section of the conceptual model of the Xiqu Centre.

One of the biggest challenges in making the model was to precisely deal with the entire model from the complex structure to fine details.

Fabrication of components including curved walls, lobby interior, distinctive ceiling and walls in different forms was a time-consuming, tedious process. 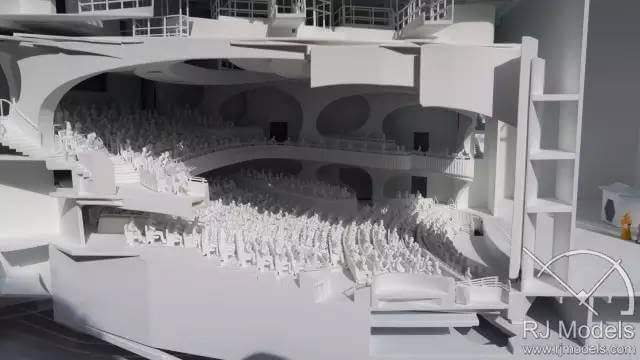 Lobby interior of the conceptual model of the Xiqu Centre.

As this is a sectional model, the lack of structural support posts various challenges keeping the theater “in the air”, but they were overcome by the thoughtful model making techniques partnered with the user of the most appropriate material, tools, and equipment. 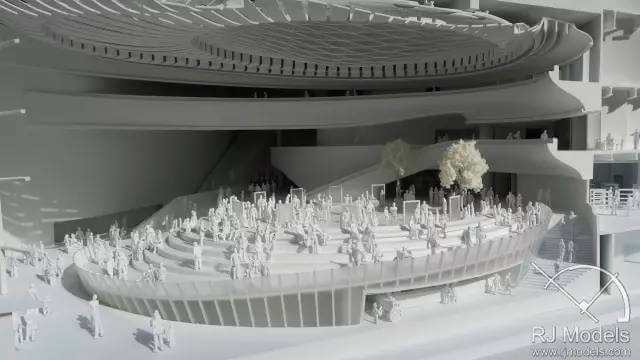 The distinctive ceiling of the conceptual model of the Xiqu Centre.

Finally, all challenges have been solved by the team with advanced equipment and professional know-how. 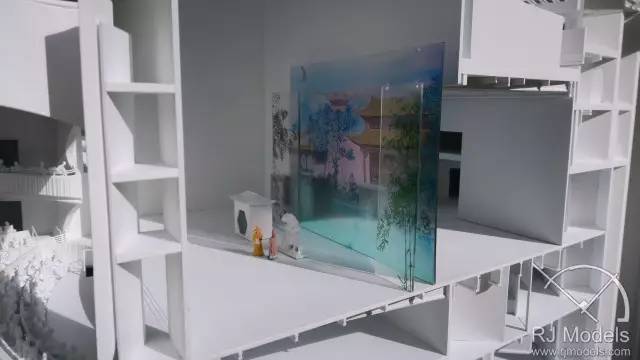 The Hand-painted performer’s sculptures purposely designed for the opera stage of the architectural model to depict a scene.

With a passion for perfection, RJ Models carved the sculptures in-house for this architectural building model, instead of using off the shelf product.

This focal point won high praise from the client and visitors. 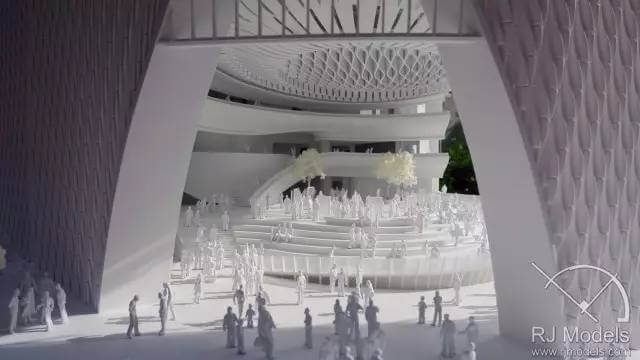 A constant stream of the audience in the conceptual model of the Xiqu Centre.

The Xiqu Centre is the mark of the inheritance of opera, will be a cultural identity of the West Kowloon Cultural District and is expected to do more cultural contributions.

RJ Models is honored to have participated in this great project and looks forward to its completion in 2018. 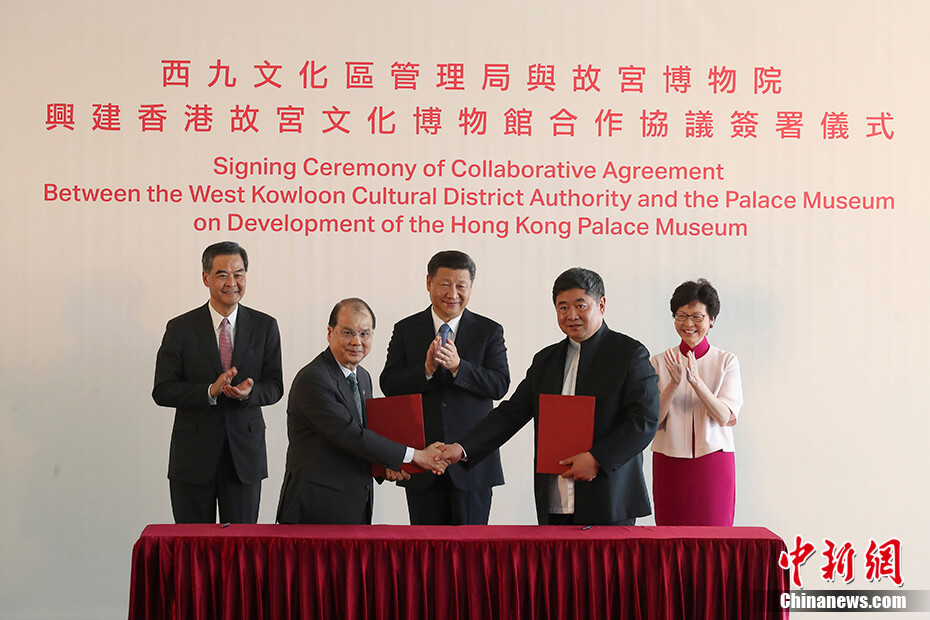 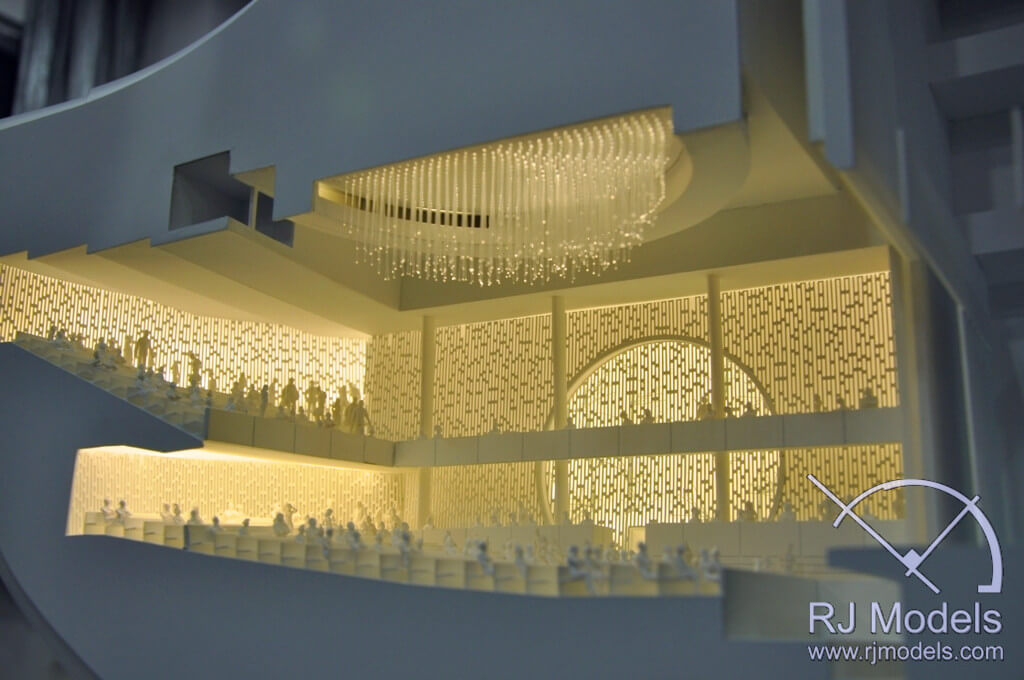 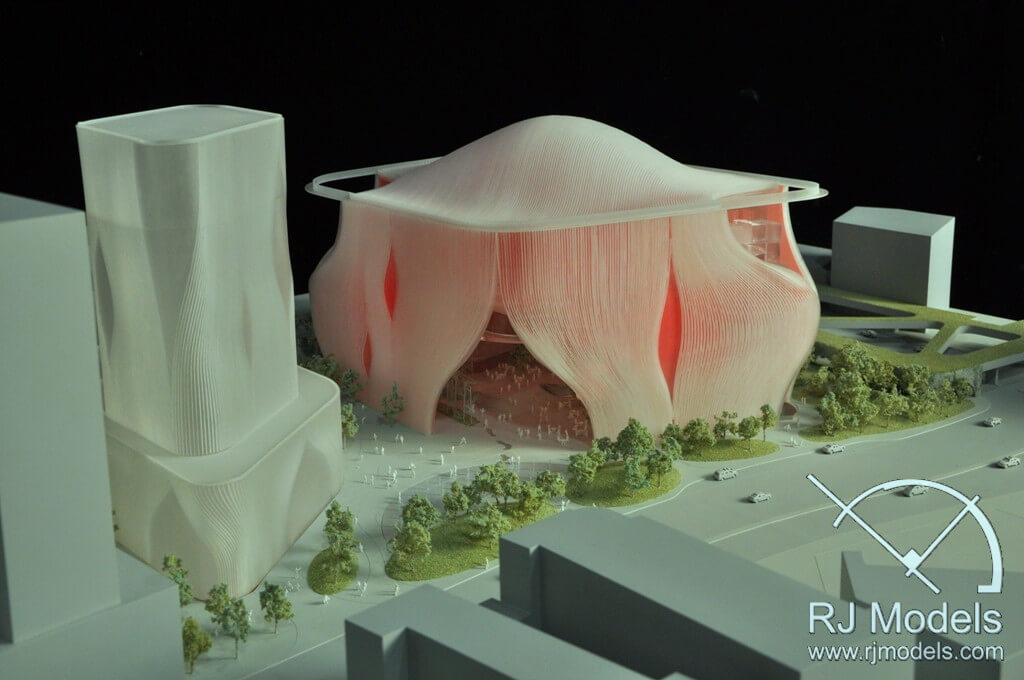 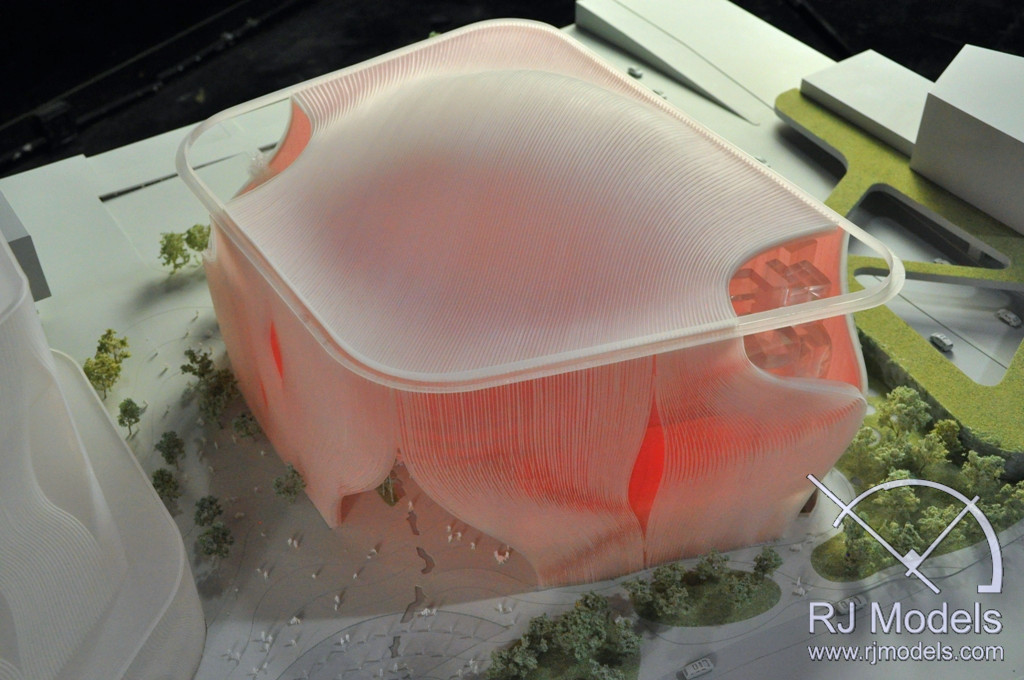